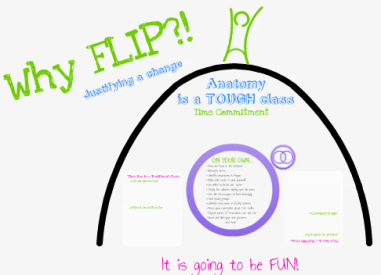 When I decided to flip my class, I knew I would need a very convincing explanation to justify the change, for both my students and colleagues.  Selling the idea to my colleagues ended up being pretty straight forward.  They thought I was crazy for trying such a radical, time intensive, change, but they were willing to let me “do my thing”.  I think they were a little curious to see how it would work.  Selling the idea to my students was another story.  I knew how critical it was to get them on board from the very beginning.  Therefore, convincing my students to embrace the flip became my top priority.

I started the first day of class by acknowledging upfront that my course was not going to be “normal”. My students were going to have to carry out a fundamental change in how they approached  the class.  However, it was critical to me that they understand my class was not going to require MORE work than any other anatomy course taught at College of the Redwoods.  To ensure they understood this, I emphasized the general rule on our campus that for every hour students spend in class, they are expected to spend at least two additional hours of their own time studying the material.  Because my class consists of 8 contact hours each week (2 hours of lecture and 6 hours of lab), I explained that my students should be spending at least 16 hours of their own time studying human anatomy.  I argued that ALL anatomy students at College of the Redwoods should be spending this many hours studying the material, if they wanted to pass the class.  Then I explained that I was simply going to help them use those 16 hours more efficiently.

I prepared a Prezi presentation that emphasized the only real difference between a flipped class and a traditional class, which is the quality of the time spent with an instructor on hand.  I concluded “the sell” by having students build a weekly schedule in which they carved out the chunks of time needed to watch the online lectures and complete the online Flippin’ Quizzes, all before class each week.  This helped students develop a realistic plan on day one, ensuring the course requirements would fit into their busy lives.

I was actually surprised by how easily the idea sold.  My students bought the justification and were willing to try out this crazy new idea…so we forged ahead, ready to flip.