My first Human Anatomy and Physiology Society (HAPS) conference was in Salt Lake City, Utah, in 2017. I was excited and nervous to attend because I had no idea what to expect when a group of anatomy and physiology professors came together. Accustomed to scientific meetings where there is cutthroat competition among attendees, I found this meeting refreshing because while there was the usual exchange of data, questions, and ideas, the general atmosphere was one of friendliness, openness, encouragement, and excitement. The most moving component was the love of teaching exuded by each member of HAPS. As I moved through the meeting and listened to my colleagues, I noticed the easy banter among them. Even when they discussed hardships, a general sense of camaraderie and heartfelt encouragement was palpable. The HAPS meeting that year focused on The Evolutionary and Developmental Bases of Human Anatomy and Physiology. As I sat engaged by the update speakers, I was struck by the comparison between the daily struggles we all face as professors and the evolutionary struggles of our ancestors. I realize that sometimes it’s hard to get out of our comfort zones and do all the extra stuff (asking for funding, scrounging for money, figuring out what to present at workshops, etc.) to get ourselves to be at a meeting, but I encourage you to take the time to venture into being a first, second or old timer at HAPS. Come walk among a most special breed of Homo sapiens: The HAPSters.

Hope to see you in Portland!

P.S. It’s not too late to make it to a Fall Regional Meeting near you! 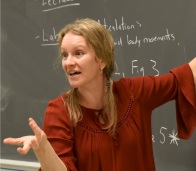 Bridgit Goldman has been teaching college-level biology since 1998.  She has a Ph.D. in Cellular, Molecular, and Developmental Biology from The Graduate School and University Center of The City University of New York. Since 2007 she has designed, developed and taught all the lecture and laboratory classes in Human Anatomy and Physiology at Siena College in Loudonville, NY.